Folical Stimulating Hormone (FSH) is a hormone secreted by the pituitary gland; FSH stimulates the growth and development of ovarian follicles.  A blood test for this hormone on the third day of the menstrual cycle is crucial in evaluating how the ovaries are functioning. A significantly elevated level (>10) implies possible decreased ovarian reserve.

Women with higher basal FSH levels may not respond as well to fertility medications in terms of the numbers of follicles and eggs recruited, and it does not necessarily predict who will and who will not get pregnant. Age is a better predictor of successful pregnancy. The level of FSH also assists us in determining the ideal dosage and regimen of fertility agents necessary to initiate proper ovarian stimulation in a subsequent cycle of treatment. 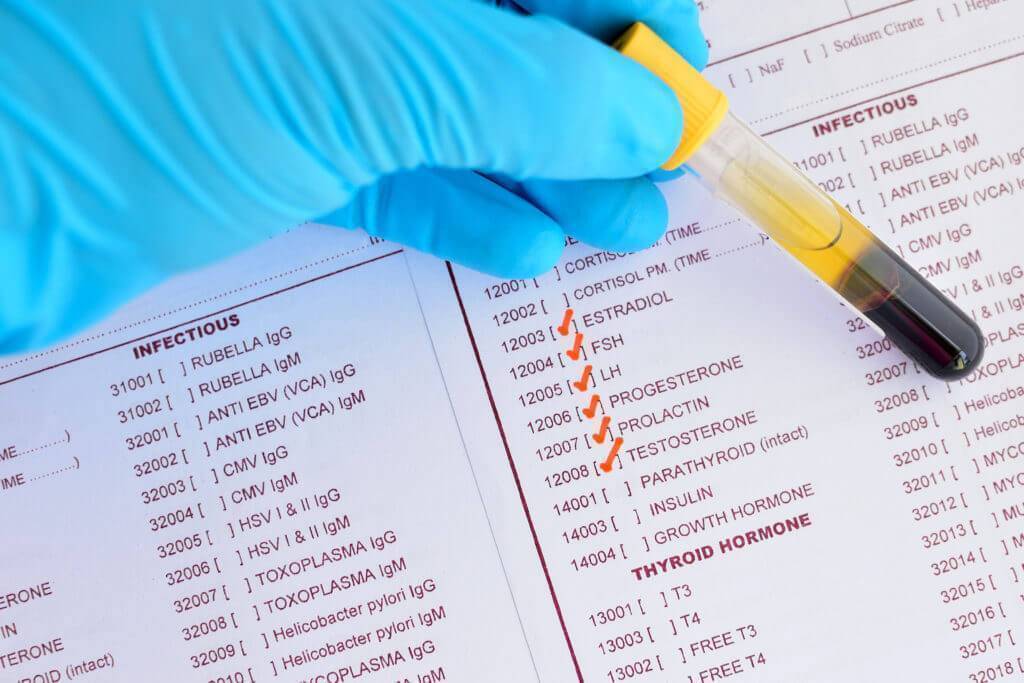 AMH is a blood test that directly measures ovarian reserve. It is produced directly by early stage ovarian follicles.  Levels (over 1.0) are favorable, while low levels (less than 1.0) indicate decreased ovarian reserve. AMH may be the best measure of the menopausal transition and ovarian age. It may also be useful in predicting ovarian hyperstimulation syndrome, the effects of chemotherapy, and in determining the treatment of PCOS.

AMH is a superior predictor of ovarian response compared to other markers, including age, and day 3 FSH and estradiol. It offers similar predictive value compared to AFC. AMH can be drawn at any time in the menstrual cycle and is not affected by hormonal therapy, including oral contraceptives.

Prolactin is a hormone secreted by the pituitary gland. Excess secretion can interfere with normal ovulation. This is why prolactin levels are checked in every woman during the infertility evaluation process. Prolactin is checked by a simple blood test. If elevated, medication may be prescribed to reduce the level, or if indicated, an MRI may be recommended to rule out a tumor of the pituitary gland.

Thyroid-stimulating hormone is a hormone secreted by the pituitary gland that controls the thyroid gland. Elevated levels low thyroid function. Women with elevated TSH levels are at a higher risk of miscarriage and ovulation problems.

A Sonohysterogram may be done to evaluate any abnormalities such as fibroid polyps or unusual and/or heavy bleeding. This is performed between days 6-14 of a cycle and provides a clear picture of soft tissues that don’t show up well on x-ray images. The procedure includes sterile water injected into the uterus.  A trans-vaginal ultrasound is performed allowing evaluation of the uterine cavity. This procedure is performed in our clinic, and most patients do not experience any discomfort or pain during or afterwards.